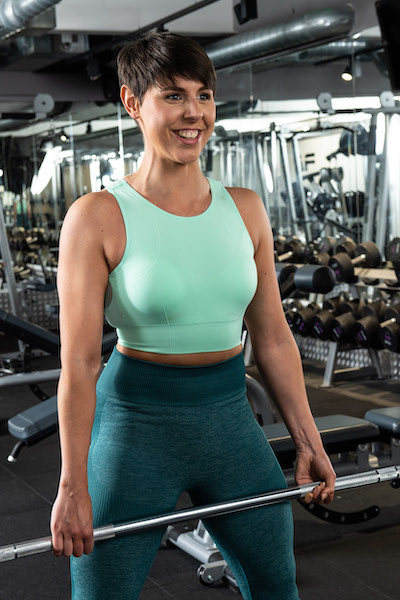 At age 18, Kim began a diet that never seemed to end. Despite being aware of having lost excessive amounts of weight, Kim felt under pressure to maintain her slim frame which left her living in a diet for years. Kim soon became concerned for health, after learning of the negative effects of being severely underweight on long term health, and so embarked on a mission to gain weight and restore muscle mass lost to years of undereating.

Having regained a healthy amount of weight, she then joined Anytime Fitness Bicester, after becoming aware of the club through its high-street presence, and sought the guidance of a personal trainer in order to learn the basics in strength and resistance training. After attending a few one-to-one sessions with her personal trainer, Kim developed the confidence to begin training independently and discovered her passion for weight training (and later bodybuilding).

“The team at Anytime Fitness Bicester are great,” highlights Kim. “They create a really friendly and positive environment in which I am able to conduct my training. The staff are approachable and always make themselves available, letting you know that they’re there for you if you need any guidance or support. It has been my sanctuary and safe house! During a spell of anxiety, when I felt almost unable to complete basic everyday tasks, I still felt able to continue attending the gym. Anytime Fitness Bicester has held an important significance during my development over these last couple of years. I’ve been bitten by the bug and am soon due to compete in my first ever Bikini Competition season, starting April!”