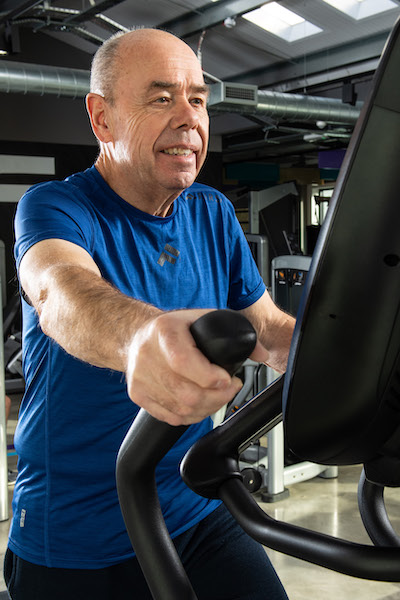 Truro-based Stuart James has always been active, working previously as a self-employed builder. However, Stuart’s life was rocked when he was diagnosed with cancer. This led to Stuart undergoing a major operation, whereby a large amount of muscle was removed from the side of his chest. As a result, Stuart’s career as a builder was unable to continue and therefore transformed his initial hobby for painting into becoming a full-time artist. Stuart’s new professional lifestyle led to him forming unhealthy habits and subsequently put on 5 stone in weight. The increase in weight meant Stuart was then diagnosed with coronary heart disease, becoming unsure on which path to take.

Stuart and his wife have lived in Cornwall for 20 years. Realising he had to act Stuart decided to join a gym, after trying a few he became aware of Anytime Fitness Truro which was due to open shortly in the city. Stuart took the leap and was in fact one of the club’s first members. He decided to take advantage of the club’s promise of premium facilities, friendly staff and a sense of community among its members. Stuart soon established the healthy habit of training regularly and managed to lose four stone in weight. He has since continued developing a healthier lifestyle with the ongoing support and coaching from Anytime Fitness Truro.

“I couldn’t live without the gym”, comments Stuart. “As a full-time-carer for my wife, Anytime Fitness Truro, in many ways, acts as my downtime. My health, fitness and wellbeing have improved immensely. I love introducing my friends to the club so they can experience the buzz I get from attending every time. I often visit family in Swindon and may have the opportunity to relocate soon, but I know this isn’t an issue as I can simply use my key fob there!”